Should the Government be in Charge of the 5G Rollout?

Find me on:
LinkedIn

In the Trump era we have come to expect a decrease in telecom regulation but the deregulation policy hit a snag recently when the US National Security Council announced a plan that would result in the government building and owning a national 5G wireless network.

5G networks are of great interest because of the speeds that the technology will make available and the security those networks offer.  The new speed capabilities gives the Internet of Things (IOT) a real push forward and in an age of increased hacking, 5G will be a welcomed technology.

Washington says we need to aggressively move toward 5G in order to reduce the threat of hacking and in order to keep up with the pace of wireless technology from other world powers.  Under a US National Security Council plan, the government is proposing to build the infrastructure and then lease access to it to the carriers who would in turn sell services to the end user.

Every one agrees we need a 5G network.  The question is who should build it and run it? 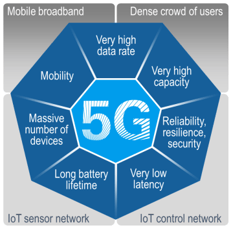 Is this something we want to entrust to a bureaucratic, slow moving entity like the federal government?  The National Security Council is a little late to the party.  Remember, an industry standard for 5G networks was developed at the end of 2017 and carriers are already moving forward with their 5G plans.  Its been widely publicized that AT&T plans to launch mobile 5G in the US this year, Verizon will launch 5G for homes this year, and T- Mobile is working on a network to launch in 2019.  So why trust the government to interfere with a communications infrastructure that has worked in the past?

FCC Chairman Ajit Pai, the CTIA (the association for wireless providers), and US telecom have all voiced the same concern about government intervention.  Most people agree that the development of the United States telecom infrastructure has flourished primarily because it has been rolled out by private companies and that any government intervention would slow down a 5G rollout.

What government can and should do is to push spectrum into the commercial marketplace and set rules that encourage the private sector to develop and deploy next-generation infrastructure. We believe the country would be better off if government concentrated on removing the regulations that stifle innovation and creativity and leave the mechanics of the 5G rollout to the private experts who have a profit motive.