Using CAF Performance Data To Uncover Bottlenecks In Your Network

As of writing this, hundreds of broadband providers across the country are testing their high-cost networks as a requirement for Connect America Fund (CAF) Performance Testing.

Although CAF tests originate from the subscriber's home networks, these tests are assessing more than just the last-mile and individual homes since their internet relies on regional and backbone networks too.

The culprit for failed tests can be anything from an outdated modem in the customer’s home, to last-mile infrastructure that hasn’t been configured properly. Other times, we've seen that the leading cause for failed tests comes from degraded speeds during peak hours around 9 pm. This is usually a sign that a network channel upstream is struggling to meet the high throughput demand and is throttling end-users in order to keep up.

Since CAF testing is required to be completed between 6 pm and 12 am, this can pose a huge problem for ISPs trying to meet full compliance. Fixing these slower speeds begins with identifying where your network is struggling to keep up.

Rural communities are often located far from major internet points of presence (POP). Longer distances mean that packets sent from rural locations will have to ‘hop’ through multiple network channels in different regions before they reach their destination. More hops ultimately mean a higher chance that a channel along the way can become congested and slow down traffic, leading to degraded end-user network speeds and thus, failed performance tests.

Using a combination of our nationwide stamper data along with analytical techniques using a tool called traceroute, we can pinpoint the bottlenecked network channel by following each hop in its journey between the end user and the destination.

Traceroute gives us a detailed understanding of each route and tells us how long it took to traverse each hop, otherwise known as the Time to Live (TTL). This is extremely useful when diagnosing hiccups or interruptions and pinpointing slower hops that are struggling to keep up with demand. With millions of tests done each year for CAF testing, there are thousands of different paths packets can take in their journey through the internet.

Depending on the region of origin and destination, many of these tests send packets through similar routes that use the same hops. Comparing different routes throughout the US allows us to paint a picture of the nationwide network and locate where the 'clogged arteries' are in regional and backhaul providers that are causing digital traffic jams in the middle mile.

The last mile isn't immune from bottlenecks either, nor are Fiber and Passive Optical Networks (PON). Since each end-user shares bandwidth at the end of an optical splitter, non-optimal split ratios and ranges from the line terminal can result in slower channels within your network. We can use this same tactic of comparing the routes of packets sent from Stamper Boxes throughout an internal network to identify which hops are having trouble keeping up with the throughput demand.

Below is a diagram of locating a problem hop in a typical network test. 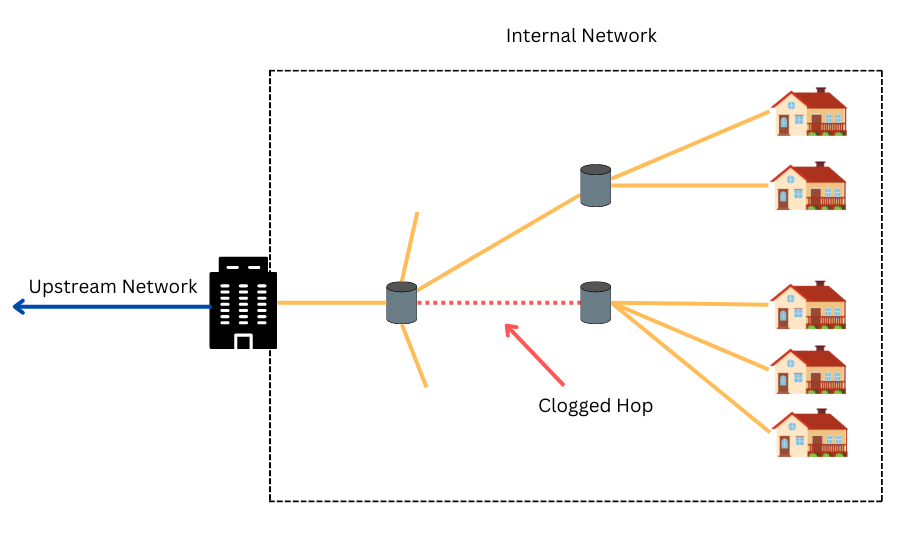 By uncovering these congested channels, we’re not only discovering why tests are failing, but also what service areas on your network are getting lower-quality broadband. This can potentially be used to make better-informed decisions about where future grant money should be spent, or determine where internal infrastructure needs attention to meet speeds that comply with CAF requirements.

CAF Testing can be another box to check off in order to complete your broadband deployment, although there is more analysis that can be done to fine-tune your network to ensure you’re enhancing your customer's quality of service.

Even today, usage patterns are changing, and ISPs are expecting to see major growth in demand for throughput over the next few years. The need for more capacity is already visible with the push to make 100/20 speeds the standard requirement for BEAD funding, compared to 25/3 as we've seen in recent fund requirements. CAF testing has made it clear that even in cases where your last mile infrastructure is excellent, a congested middle mile will always hinder your network's performance.

ISPs should take advantage of the wealth of data they receive each quarter from CAF performance testing in order to ensure that their rural network can keep up with the increasing demands of the future.